In 1975, Glen Taylor purchased Carlson Wedding Service, the foundation for what would become Taylor Corporation.

Also in that year, Dave Salsbery joined the firm that is now Farrish Johnson Law Office.

Carlson Wedding Service owner, Bill Carlson, decided to sell the company in preparation for retirement. Glen Taylor had worked with Carlson since 1959 and purchased the business. He founded Taylor Corporation in 1975. Taylor Corporation produces interactive print and marketing solutions and is comprised of more than 80 subsidiaries and employs more than 12,000 people across 25 states, Puerto Rico, and nine foreign countries. 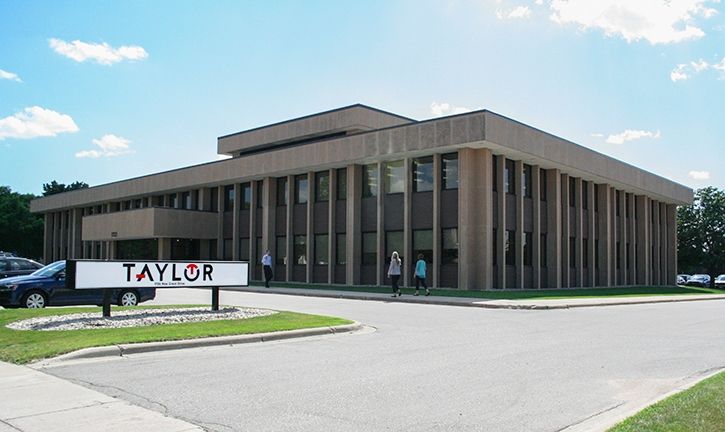 The Glen A. Taylor Foundation focuses on supporting education with emphasis on early child development, helping students in need by providing scholarships and other education assistance.’

Born in Winnebago, Minnesota, Dave was inspired to study law when his father, who knew Charlotte Farrish, commented what she and other lawyers do looked interesting. Dave found it appealing and had an opportunity to work at Farrish Johnson Law Office as a runner. He first interviewed with Bob Johnson in 1968 for the position then went to work recording documents for Charlotte and doing some investigative work for Bob. 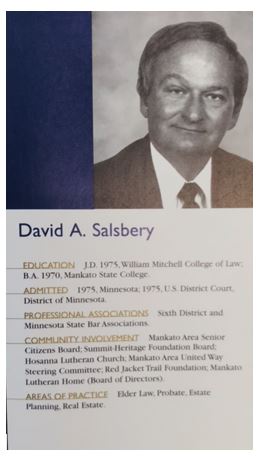 Also in 1975, Charlotte Farrish Luwe was selected as YWCA’s Woman of Distinction. The women selected for this honor have made large impacts on the community that help women live independently, combat ignorance, actively try to end gender violence and provide community assistance.

Mankato’s Union School closed in 1975. The first Blue Earth County school house was erected in 1855 and, as enrollment increased, the building was torn down and the Union School was built in 1867. Teaching all grades, the original building lasted through 1919, when again it was torn down and the second Union School was built. That school closed in 1975 due to declining enrollment and the building became part of Mankato Technical College. Today is an office building called Union Park, where from 1984-2006 Farrish Johnson Law Office resided. 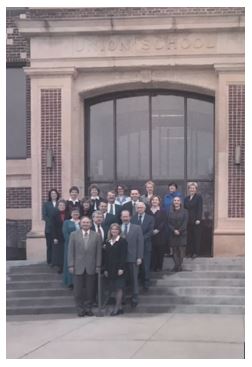 Dave considered his ability to work with people one of his greatest strength and felt he worked in the right area of law. He knew Farrish Johnson held one of the best reputations in the area.

In 2013, Dave retired from the practice of law. He and his wife, Donna, live in Mankato, and enjoy spending time with their family, in particular with their grandchildren. Dave is also an avid hunter, fisherman, and dog enthusiast.

1975: Marie Simmonds starts working at the Zapata restaurant in Mankato. She and her husband Rick Otto would go on to buy the business in 1987 and change the name to Zanz Mexican Restaurant. 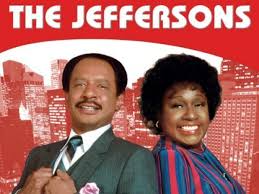 April 29, 1975: The last American military personnel leave Vietnam with the evacuation of the United States embassy in Saigon, completely ending American involvement in Vietnam and the Vietnam War. 1,053 Minnesotans gave their lives over the course of the war.

April 4, 1975: Microsoft is founded as a partnership between Bill Gates and Paul Allen to develop and sell BASIC interpreters for the Altair 8800.

June 7, 1975: Sony introduces the Betamax videocassette recorder for sale to the public.

June 20, 1975: Jaws is released and becomes one of the first blockbuster films. 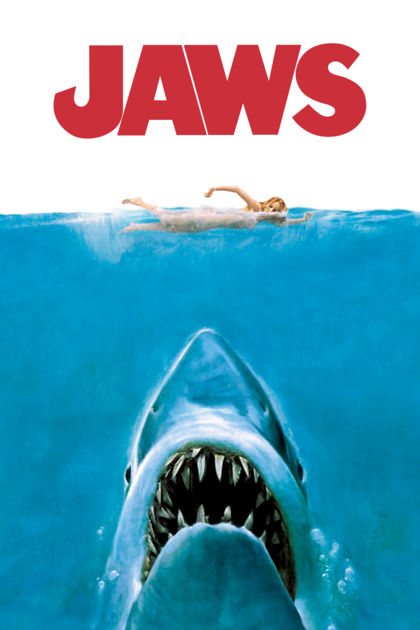 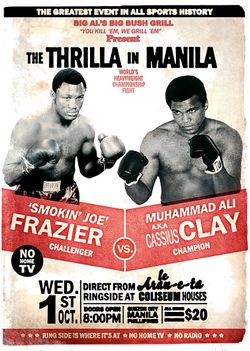 November 12, 1975: US Supreme Court Justice William O. Douglas retired after 36 years. Justice Douglas was born in 1898 in Maine Township Otter Tail County, Minnesota. He was nominated by President Franklin D. Roosevelt and his term of 36 years and 211 days is the longest in the history of the Supreme Court. He was succeeded by John Paul Stevens.